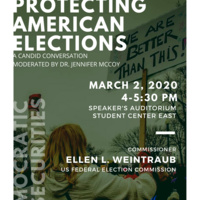 FEC Commissioner Ellen L. Weintraub has served as a commissioner on the U.S. Federal Election Commission since 2002 and chaired it for the third time in 2019. During her tenure, Weintraub has served as a consistent voice for meaningful campaign-finance law enforcement and robust disclosure. She believes that strong and fair regulation of money in politics is important to prevent corruption and maintain the faith of the American people in their democracy. She sounded the alarm early–and continues to do so–regarding the potential for corporate and “dark-money” spending to become a vehicle for foreign influence in our elections. Weintraub is a native New Yorker with degrees from Yale College and Harvard Law School. Prior to her appointment to the FEC, Weintraub was Of Counsel to the Political Law Group of Perkins Coie LLP and Counsel to the House Ethics Committee.

College of Arts and Sciences