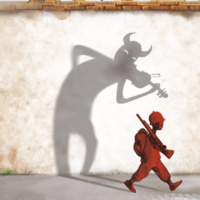 The Soldier's Tale is a theatrical work "to be read, played, and danced" by three actors, dancer(s), and accompanied by a septet of instruments. The piece was conceived by Igor Stravinsky and Swiss writer C. F. Ramuz and is based on a Russian folk tale The Runaway Soldier and the Devil. The libretto relates the parable of a soldier who trades his fiddle to the devil in return for unlimited economic gain. The music is scored for a violin, double bass, clarinet, bassoon, cornet, trombone, and percussion, and the story is told by three actors: the soldier, the devil, and a narrator, who also takes on the roles of minor characters. A dancer plays the non-speaking role of the princess, and there are additional ensemble dancers. Igor Stravinsky wrote The Soldier's Tale during World War I when he was in exile in Switzerland. Stravinsky had already made a big splash in the musical world with his earlier trio of large-scale ballet works The Firebird, Petrushka, and the infamous The Rite of Spring, all of which were in collaboration with the famous Ballet Russes in Paris. Because of the composer's exile and the economic restrictions that accompanied WWI, The Soldier's Tale (1918) is a much more modest composition in terms of personnel, but it is a evening-length theatrical work lasting about 1 hr. and 15 minutes. It is a work on par with his other theatrical works and is known as a masterpiece of the early 20th Century avant-garde.

Department
CENCIA, College of the Arts, School of Music
Add to calendar