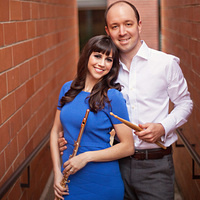 Jessica Petrasek recently finished a position with the Kansas City Symphony and now lives in Atlanta. She has a Master of Music from Rice University and a Bachelor of Arts from Princeton University. Jessica is the Principal Flutist of Breckenridge Music. She has been the Principal Flutist of the Wichita Symphony Orchestra and the Piccoloist of the Sarasota OperaOrchestra. She has been awarded both the "Best Performance of a Newly Commissioned Work" and Third Place prizes at the National Flute Association's Young Artist Competition.

Jessica was a NFAA YoungARTS Silver Award Winner and a Presidential Scholar in the Arts. She has held fellowships at the Yellow Barn Music Festival, the Music Academy of the West, the National Repertory Orchestra, and the Tanglewood Music Center. She and her husband, ASO Principal Percussionist Joe Petrasek, perform as the Petrasek Duo.

Jessica's biggest passion outside of music is horseback riding. She hangs out and trains with her horse Raverti ("Rav") almost every day.