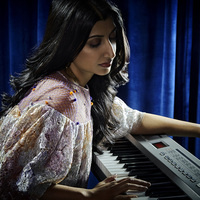 Armed with lyrical wit, virtuosic piano runs, and a sultry-sweet voice that hearkens back to the golden age of jazz, Atlanta-based songwriter Anita Aysola is a deft musical mixologist who seamlessly infuses jazz and blues with classic rock and traditional Indian influences.

Her 2008 debut album "More Than Maybe", showcases her songwriting prowess and broad range of influences, from Norah Jones to Otis Spann.  Anita’s exploration and discovery are intimately American, a theme she unpacks musically, lyrically, and emotionally on her latest album, "Beyond Our Dreams", which debuted in 2018. Anita’s songs fold radiant flights of Indian-style improvisation and rhythm into resonant storytelling and piano chops. Think Anoushka Shankar meets Randy Newman. The lyrics in Anita’s songs have a similar--and similarly complementary - dual nature, be it as a person of two cultures, or of several callings, as a musician, mother, and wife.

Anita Aysola will premiere on our @RialtoCenter Facebook page on at noon April 21, don't miss it!