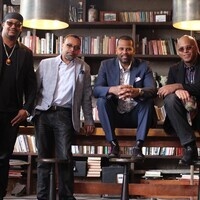 The Senators is a collaboration of some of the finest musicians that reside in Atlanta, Ga. All are natives of Atlanta except for Lil John Roberts who is originally from Philadelphia. They have individually played with some of the top names in the industry like: Janet Jackson, Stevie Wonder, Prince, George Duke, Rachelle Ferrell, George Benson, George Howard, Peabo Bryson, New Edition, and many others! Lil John is also the founder of a legendary funk-jazz band called The Chronicle, which he formed when he moved to Atlanta in the early '90s. The Senators are all producers and first-call session musicians:

Join us for this special Livestream performance on our Facebook, page and YouTube Channel @RialtoCenter, at noon August 18, don't miss it!

Feed Your Senses is supported in part by the Fulton County Board of Commissioners, Georgia Council for the Arts through appropriations from the Georgia General Assembly (GCA is a partner agency of the National Endowment for the Arts), and the Mayor’s Office of Cultural Affairs.