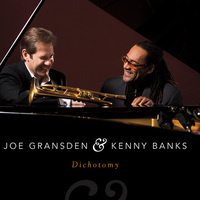 If you need a mid-day mental health break, join us for Feed Your Senses Livestream featuring Joe Gransden and Kenny Banks, Sr.  Joe and Kenny have been performing together for over 10 years! They are close friends and have such musical respect for each other that it made perfect sense to record together. The result is "Dichotomy", a beautiful CD that takes the listener on a soft, relaxing journey.

Trumpeter Joe Gransden has performed worldwide and already released 14 CDs. Renowned first for the hard bop approach of his trumpet, Gransden's singing voice has been compared to Chet Baker and Frank Sinatra. Gransden has been on the road as a sideman with the big bands of Tommy Dorsey and Glenn Miller. A number of A.F.M. contracted sideman gigs include Barry White, The Moody Blues, Kenny Rogers, The Temptations, Aretha Franklin, The Whispers, etc. Eventually moving to New York City, he performed with numerous groups, including sub work with Toshiko Akiyoshi and Chico O’Farrill at the famous Birdland Jazz Club. Meanwhile, Gransden formed his own group, which performed in Brooklyn each week and included the venerable guitarist Joe Cohn and ex-Betty Carter bassist, Matt Hughes. The Joe Gransden 16 Piece Big Band, formed in 2009, is quickly becoming one of the busiest groups on the jazz scene.

Kenny Banks Sr.--pianist, composer, arranger and performer--has performed at the inauguration and the United Nations Ceremony for President Barack Obama and appeared at Carnegie Hall in New York City and the Philharmonie in Berlin. Among Banks' credits are appearances with Earl Klugh, Kenny Garrett, Wess Anderson, Russell Gunn, Lizz Wright, Rene Marie, Kevin Mahogany, Kurt Whalum, Albertina Walker, Dorothy Norwood, Jennifer Holliday, Aretha Franklin and the Philadelphia Orchestra. Banks has also appeared in scenes from the Tyler Perry film "The Family That Preys" and has a composition entitled "Hello Love" on the GMC movie "Raising Izzie".  The release of "Truly Free" is Banks' first Jazz CD but his latest recording "Dichotomy" is the duet with Joe Gransden.

When Gransden and Banks team up for this special performance, you are in for a treat you won't want to miss!

Feed Your Senses is Sponsored by:
100 Peachtree and Fulton County Arts and Culture

Free and Open to the Public