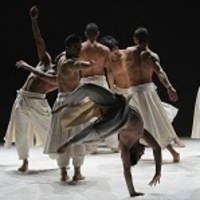 Astounding French Dance from the Streets of Algeria
Internationally renowned dance company, Compagnie Hervé KOUBI, debuts their critically acclaimed work “What the Day Owes to the Night” (Ce que le jour doit à la nuit) at the Rialto.   Recognized as one of Europe’s most distinctive choreographers, Hervé KOUBI believed he was of French heritage until he was 25, when his father suddenly revealed his Algerian roots. “What the Day Owes to the Night” is the result of his ensuing journey to his parents’ homeland, where he recruited artists who had never been to dance school, but performed hip-hop and capoeira, backflips and head spins, on Algeria’s streets and beaches.  In a beautifully fluid piece of inspired choreography that combines urban and contemporary dance movement, capoeira, and martial arts with powerful imagery, KOUBI’s French-Algerian West-African all-male dance troupe presents a jaw-dropping performance packed with emotional intensity.

Department
Rialto Center for the Arts
Add to calendar