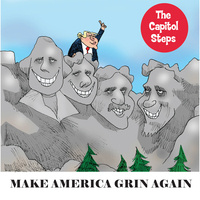 Putting the Mock in Democracy

The Capitol Steps return to the Rialto with new material to make you LOL and ROTFL! The Capitol Steps began as a group of Senate staffers who set out to satirize their Capitol Hill employers. Many of the current members of the Steps are former Capitol Hill staffers. Taken together the performers have worked in a total of eighteen Congressional offices. Their unique and hilarious brand of political comedy leaves audiences in stitches!

Department
Rialto Center for the Arts
Add to calendar