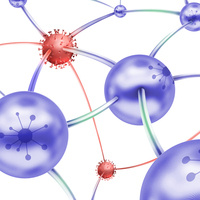 There is a categorically new way to fight disease, which could have a significant impact on not only COVID, but also future pandemics. Its origins come from math, game theory, and computer science. It's an app which is fundamentally different from every other app (and which resolves deep issues with "contact tracing apps").

Functionally, it gives you an anonymous radar that tells you how "far" away COVID has just struck. The twist is that "far" is quantified in terms of the network-theoretic distance in the repeated-close-contact network. Surprisingly, this small foundational change has powerful repercussions.

The simple idea flips the incentives. Existing approaches told the user after they were exposed, asking them to take actions to protect everyone else from their potential infection. This new tool lets you see disease striking from afar in your physical interaction network before you are directly exposed, so that you can avoid getting infected in the first place. This uniquely aligns incentives so that even selfish behavior contributes to societal pandemic control.

Po-Shen Loh is a math professor at Carnegie Mellon University, and the national coach of the USA International Mathematical Olympiad team. His research considers a variety of questions that lie at the intersection of combinatorics, network theory, probability, and computer science, and his academic work has been recognized by the USA Presidential Early Career Award for Scientists and Engineers. He also dabbles in social entrepreneurship, previously founding the free math and science education platform expii.com which sees 500,000 visitors each month, and he has featured in or co-created videos totaling 10 million YouTube views. Upon the outbreak of COVID, he turned his mathematical attention to create NOVID, the first app to introduce the fundamentally different "radar" paradigm for pandemic control.

Host: This event will be hosted by Ernest G. Welch School of Art & Design and Department of Computer Science at GSU. For questions about this event, please contact Prof. Xinran Hu (xhu18@gsu.edu) or Dr. Jonathan Shihao Ji (sji@cs.gsu.edu).

College of Arts and Sciences, School of Public Health, College of the Arts